In a world of chaos, ALTAR-3000 is a long overdue, automated totem of customised belief. Powered by natural language processing, this intelligent home altar performs gimmicky New Age rituals all while generating "prophecies" for headlines retrieved from betting platforms that offer exchanges on near-future political, financial, and other events. The automated sand garden—adorned with paraphernalia that might have meant something once but doesn’t reflect much in the age of multitude of easily digestible truths—disseminates its prophecies on conspiracy forums.

Bet What you Believe In 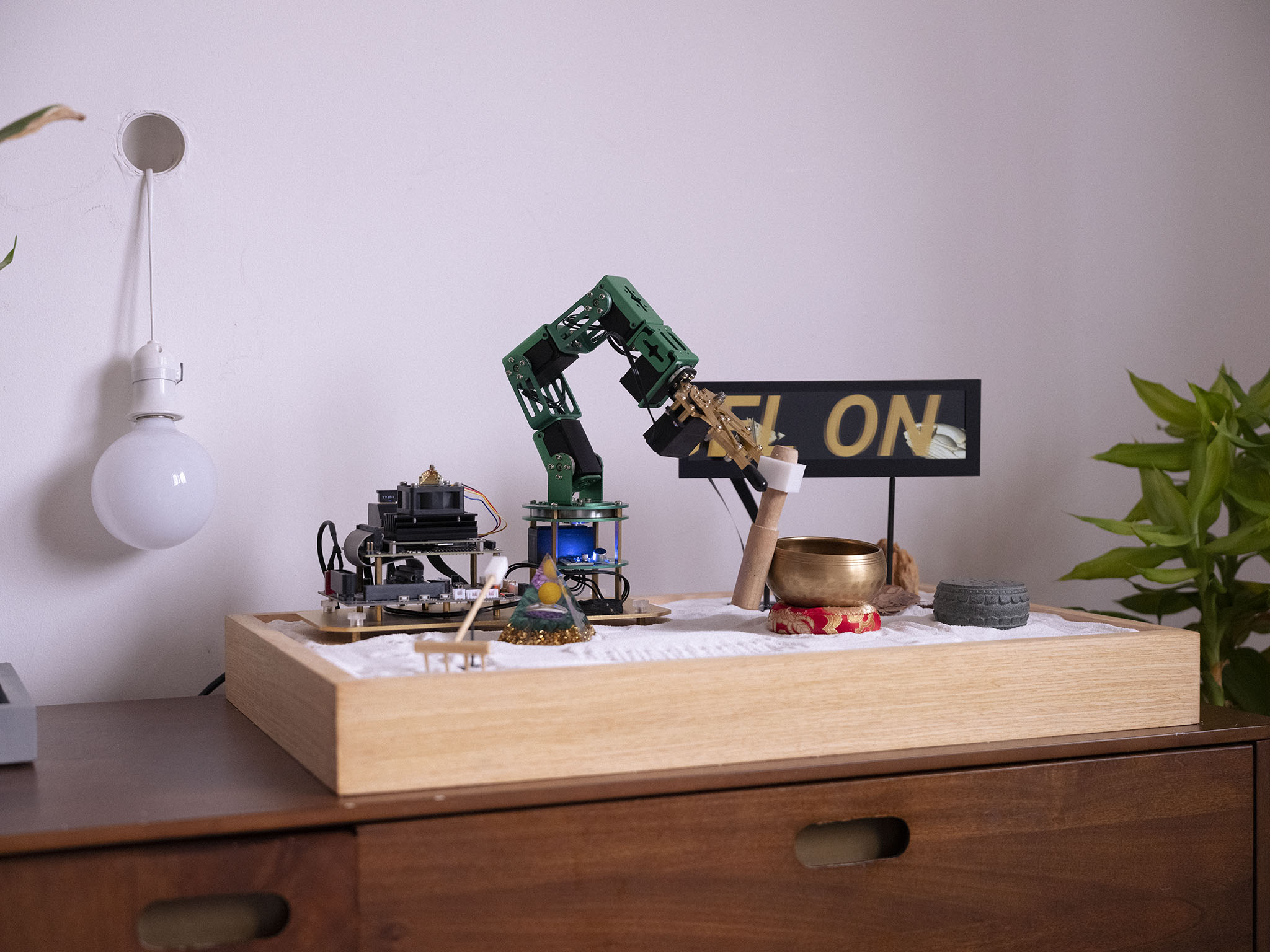 In 2018, then 25-year-old Patrick Cage made decent money by betting on political events. In recent years an array of bet on what you believe in websites such as PredictIt or its blockchain alternative Augur have been gaining popularity. These platforms allow average human to submit near future events of any kind on which users can bet. Over time, Patrick started noticing submissions that seemed completely off. For example, people were putting money on indictments of political figures, even if no such speculations had been reflected in the news. Naturally, Cage began betting against improbable odds all but wondering where they would be coming from.

In recent years the profession of a prophet seems to be getting chic again. More than (but not excluding) television or religious gatherings, the most fertile grounds for professing inevitably become digital gathering grounds such as social media and less scrutinized forums. Rather than top-down frameworks of traditional information dissemination, forums bring a sense of digital community with active conversation and support. Furthermore, propagation of news within social media has always been a question of immediacy and style. The process through which visions pollinate is oftentimes canonical: piercing noise with exclusive, insightful, quick-to-digest content, upon which more complex narratives are extrapolated and eventual physical collective actions—storming pizza shops or capitols—taken. Q’s drops are usually concrete enough to loosely reference events IRL but abstract enough to be malleable, retracted or reinterpreted in case of failure; often accompanied by images and memes as hooks. Thanks to their popularity, posts are further aggregated by more mainstream social media through targeting, algorithmic loops, and biased moderation. Conspiracist prophets turn influencers turn machines turn Qs.

In a world of chaos, ALTAR-3000 is a long overdue, automated totem of customised belief. The smart home altar is adorned with paraphernalia that might have meant a lot once but doesn’t reflect much in the age of digestible truths. ALTAR-3000 evokes revitalised New Age aesthetics from the times of cyber hippies, when internet utopias constituted where gods and transcendence were to be found. 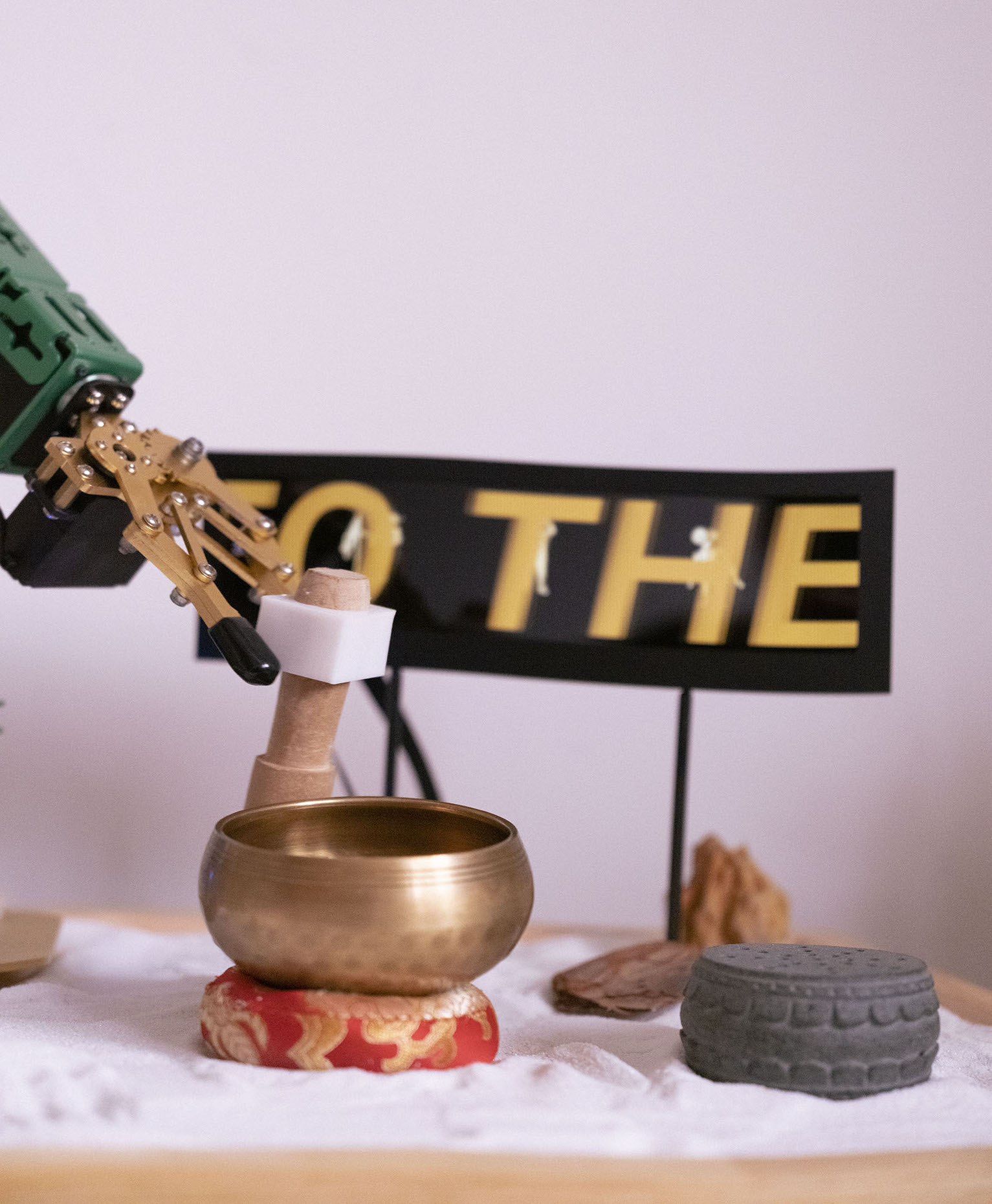 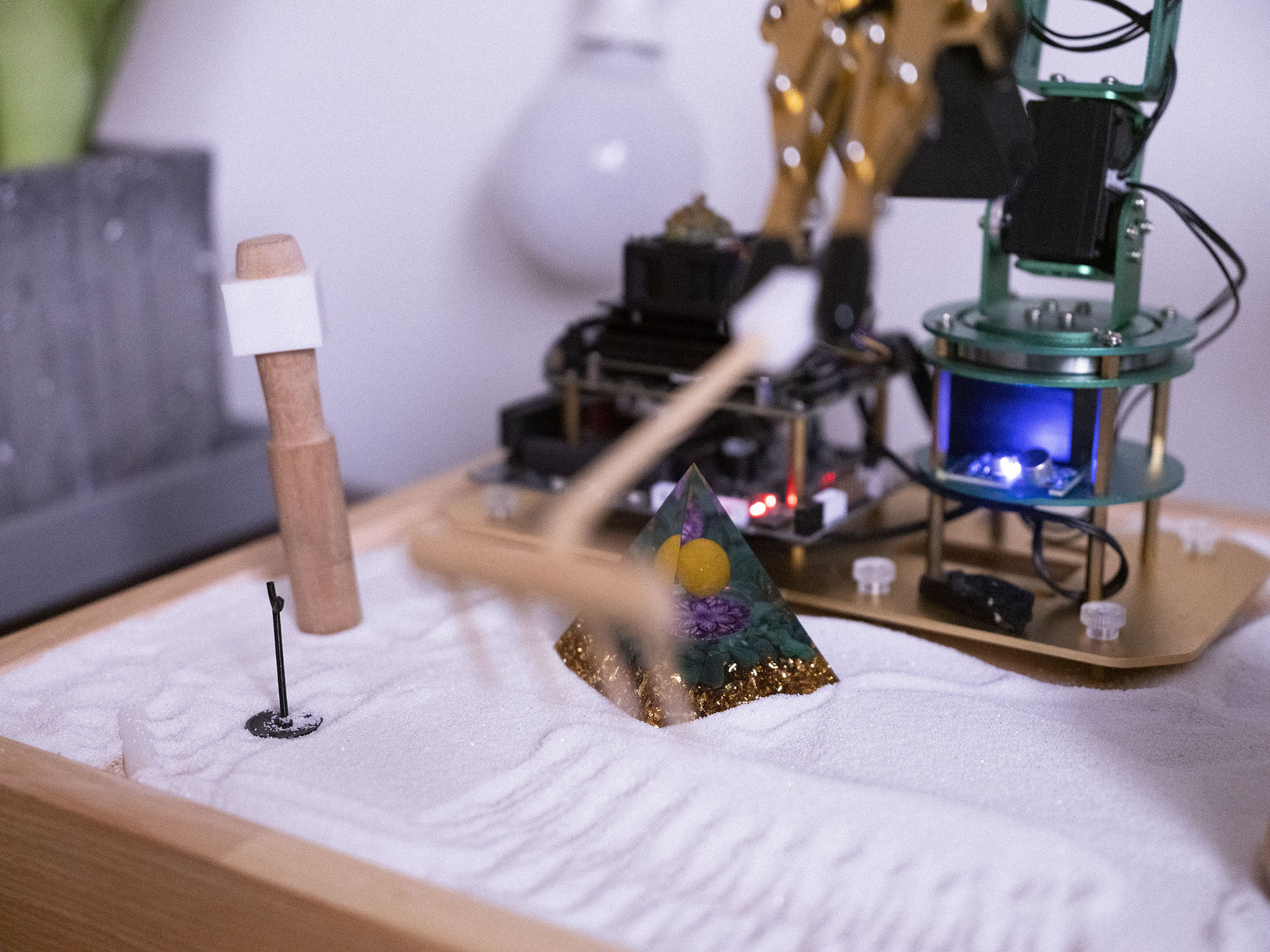 ALTAR-3000 should not be mistaken for a toy, despite its cute gimmicky rituals, for it is a powerful AI prophet. The home altar connects to the internet to retrieve latest betting headlines from PredictIt, humanity’s (well, mostly America’s for the time being) financial positions on the near future IRL. Trained on writings of prominent prophetic classics like Nostradamus, to more recent stars such as Yuval Noah Harrari, to compilations of Q’s drops themselves, lightly styled with a layer of politically-oriented poetry (of which the authors should not be undeservedly mentioned here), the home shrine produces a short, prophecy-resembling, poetic yet often inconsistent message for a chosen bet headline. Upon vocal request, ALTAR-3000 will share the message with the global community by uploading it to 8kun forum’s “random” section. If the post is blocked by caption verification, user will need to help the altar by spelling the captcha aloud; a prayer of sorts. As opposed to boring AIs and abstract, ephemeral algorithms quietly taking over parts of our life, ALTAR-3000 is blunt, bold, tangible, and luddite-friendly. Should one disagree with such an object, the good old ethernet or power cables can be unplugged conveniently for a prompt disconnect. So far, ALTAR-3000 has not been banned on 8kun it appears. 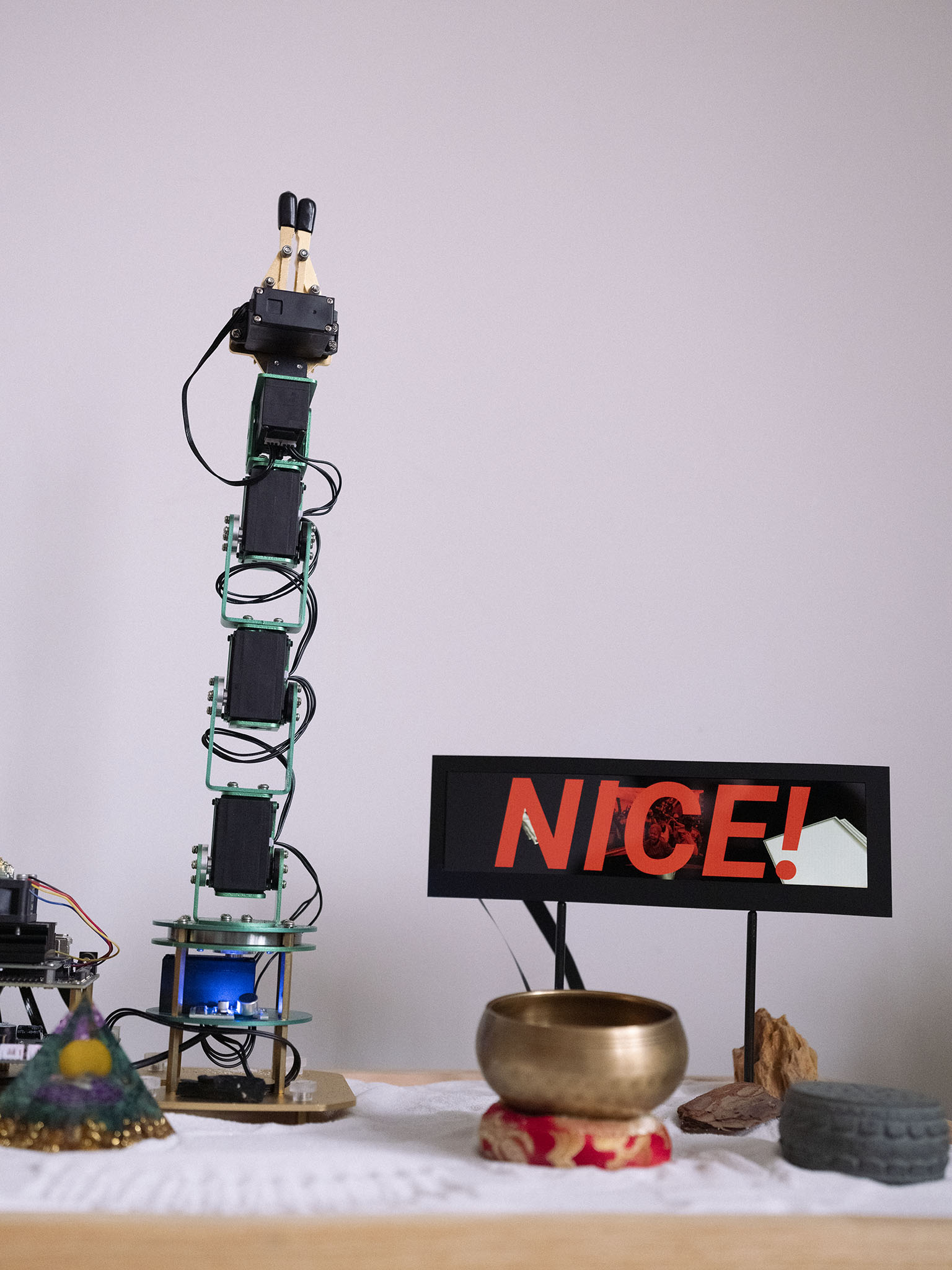 Under the hood, ALTAR-3000 is powered by a fine-tuned GPT-Neo algorithm, inspired by a research on Memorization of Conspiracy Theories in Text Generators, which outlines how a common issue in today's text generator algorithms, lack of consistency, makes them ideal content creators for the purpose. The overall backend, web scraping, and voice interactions are made with Python, whereas the visual screen output is handled by openFrameworks. Principal hardware consists of a Jetson Nano board and customised Yahboom Dofbot desktop robot arm. 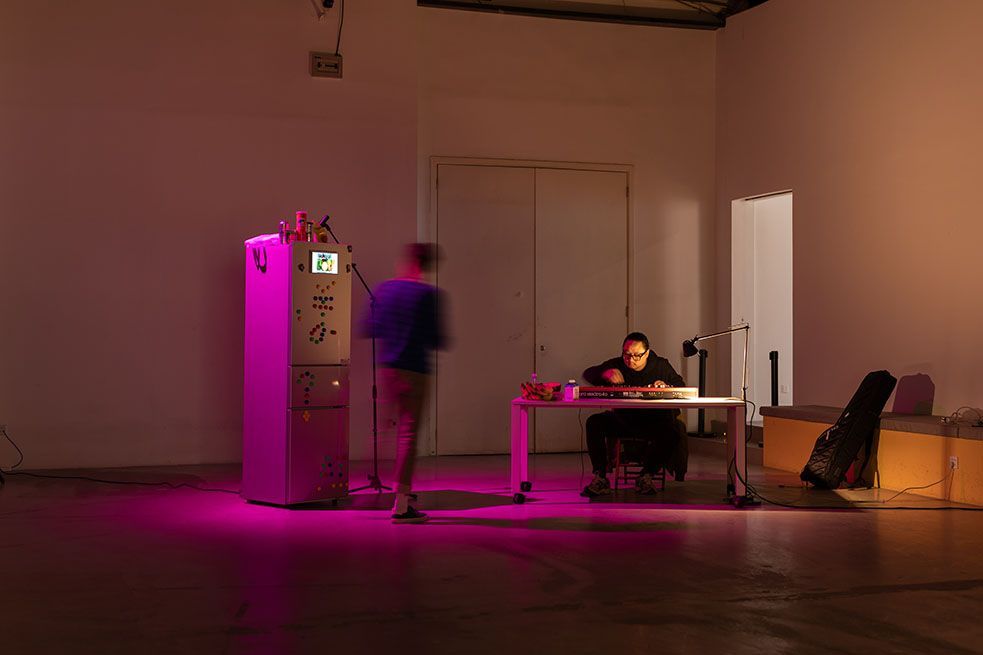